Counting coloured cells, either cell colour or font colour, is easily achieved with the function presented here. One of the major benefits of this routine is that it can utilise standard worksheet functions for summing the colours, without the need for a 'helper' column.

The function has been specifically designed to return an array of colorindex values that can be used in standard worksheet functions, such as SUM. In reality, it is best served by the SUMPRODUCT function to count the instances of a particular colour, using the following technique(s).

To get the colorindex of a specific cell, simply use
=ColorIndex(A1)

As well as counting all cells with a particular colorindex value, it is possible to use the colour of a cell as the comparison, like this
=SUMPRODUCT(--(ColorIndex(A1:A100)=ColorIndex(A1))) 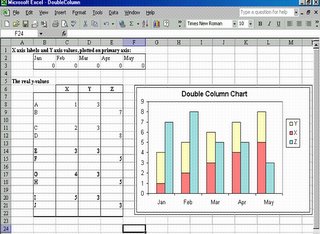 1) Select the data in B2:F3 and make a column chart. The chart will be blank!
2) Select B6:F22 and click the Copy tool. Select the chart and click the Paste tool.
3) Right click the North data series in the chart, open the Format Data Series dialog. On the Axis tab click on the Secondary Axis box to put a check mark in it.
4) Right click within the Chart Area and open the Chart Option dialog. In the Secondary Axis area, put a check mark in the Category (X) Axis box and remove the check mark from the Value (Y) Axis box.
5) In turn, format the other three data series to use the secondary axis. After this, when you click on a data series in the chart, the coloured range finder lines will enclose the data in B6:B22 and the y-values.
6) Right click any data series in the chart, open the Chart Type dialog and set the chart to stacked columns. If you do this without selecting a data series the x-axis labels will be totally unacceptable.
7) Right click on any data series in the chart, open the Format Data Series dialog, and on the Options tab set the Gap width to 0.
8) We need to hide the secondary x-axis. Do not merely clear or delete it. Right click on the secondary x-axis (top one) and open the Format Axis dialog. Set the Major and Minor tick marks to none. Set the Tick marks labels to none.
9) Click on the legend box and then click to select the Series 1 text. Press the Delete key.
10) Note, you may change the order in which the data is displayed. Open any Format Data Series dialog, open the Series Order tab and use the Move buttons to reorder the series to your requirements.
11) Remember there is a hidden secondary x-axis. This may interfere with the chart title if the two overlap. You may wish to use the secondary x-axis title as the chart title to avoid this problem.

Google SMS (Short Message Service) enables you to send queries as text messages over your mobile phone or device and easily get precise answers to your questions. No links. No web pages. Just text and the information you're looking for. You can use Google SMS to find definitions for a word or phrase on the Web. Enter 'define' followed by the word or phrase (or use the shortcut 'D' before the search terms) and send the message to the US shortcode 46645 (GOOGL on most phones).

Google SMS works on all major mobile providers in the US, including Alltel, Cincinnati Bell, Cingular, Nextel, Sprint PCS, T-Mobile, and Verizon.

TurboDbAdmin, presented by TurboAjax Group: A single-page solution for exploring and editing databases from a browser. Edit data just like you would in a desktop application, without submit buttons or page refreshes.
awesome and unbelievable!

Hi, What's up?
Answer: A new command called "dbsearch" is ready! You type it here...
http://saraswaticlasses.com

What does it do?
Ans: Search the MySQL data if phpMyAdmin is installed.

Can the parameters made shorter and easy to remember?
Ans: Yes! you can create a shortcut using the shortcut command like...
shortcut myadmin http://saraswaticlasses.com/phpMyAdmin/

Where can I say that this whole thing is crap and utterly useless?
Ans: At google groups discussion board.
http://tinyurl.com/bsvx3

Help with if/else query
I'm trying to consolodate the following 2 queries into 1. Right now, I'm using PHP to filter the condition. Is it possible using a mysql case condition?


The contact id array has already been created so we know these entries exist in the db. What we don't know is whether or not an entry exists under my user_id. If it doesn't just grab the next row corresponding to that contact id.

Exclude NULL from Group By

I would like to group results by KIND. However, i also want to return every row that doesn't have a KIND assigned, that is where the value is NULL. A normal GROUP BY clause:

SELECT max(x), kind FROM table WHERE x GROUP BY kind;

would simply group all NULL entries into one group and return:

But instead i would like to get only the "kind" column values grouped that exist and every row with where "kind" is NULL returned individually. The desired result would look like this:

I tried this with the iSNULL function, but this doesnt seem work on the GROUP BY clause. Can this be achieved in one query?

btw, it might seem silly to do this with the example given, but i just had to grossly simplify it. Thanks for your help.

I have a table with 5 fields each one may have a value or NULL.
I need to add a 6th field with a numeric value based on each other field with the following condition:
If field is empty the value is 0
If field has value the value is 1
I need to concat all these value in the order of the fields so I have

Using a variable with LIMIT in SELECT statement

Is it possible, either directly or with a decent workaround to perform a LIMIT on a SELECT statement using a variable?
For example, I want the top N results, where N might be passed in to a stored procedure, or even issued from the command line...

This fails at 'LIMIT N' because, apparently, LIMIT has to be followed by a literal constant.
Is there a way to do this, or do I need to construct the SQL in my client and give up on using a stored procedure whenever I need a variable number of results?

Open Source Strategies: Freeware vs Shareware vs Open Source: What are the differences between three models of "free" software, and why does it matter? With all the excitement, many people are actually confusing open source software with two other models of "free" software--with potentially serious consequences. Here, someone will try to clear it up.
http://opensourcestrategies.blogspot.com/2005/09/freeware-vs-shareware-vs-open-source.html